What Makes A Victorian Bathroom?

In the Victorian era, the British Empire was far-reaching, and bathroom designers from around the world had an unprecedented amount of inspiration to draw upon. Eclecticism and opulence mingled with Gothic influences and Middle-Eastern flavours, and it all gave rise to a style that continues to grow in popularity.

In this article, we’ll explore the history of a Victorian bathroom and the features that define it, to provide a little inspiration for your own home.

A brief history of the Victorian bathroom

The phenomenon we know as the modern bathroom all came together in the late 1800s. Innovations included sewer systems, hot and cold running water, indoor plumbing and the invention of the flush toilet. The Victorian era was named after Queen Victoria, and the style was popularised around 1860 up until the early 1900s.

During this period, plain white tiles became the wall covering of choice, and in wealthier homes was often combined with marble sinks, and sometimes even marble floors. The earliest Victorian bathtubs were oval and made of copper, zinc, or tin. That is, until the invention of the enamelled cast-iron tub in around 1883, and by 1885, a cast-iron claw foot version was the tub of choice for Victorian bathrooms. The days of avoiding a bath were over!

Features of a Victorian bathroom

Victorian bathrooms were opulent, elegant, and ornate. But how does that translate into design? These types of bathrooms usually feature one or more of the following: 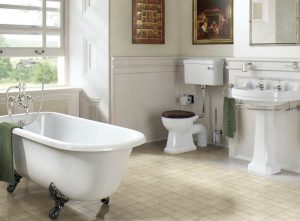 One of the most beautiful features of this room, and the epitome of Victorian design, is its statement free-standing bath. Rather than being fixed into a unit against a wall, this single-ended version stands proudly on its own, complete with traditional tapware and ornately slippered feet. The Victorian bathroom vanity features a pedestal design, and the toilet cistern is raised in the Victorian style and openly displays its shiny metallic pipework. The chequered tiles add depth to the room, the antique artwork an olde worlde touch, and the ivory colour scheme allows this room’s unique fixtures to take centre stage. 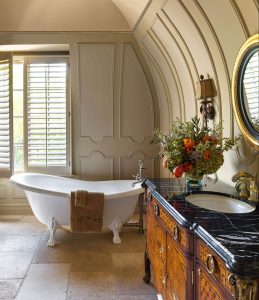 This Victorian style bathroom features a delightful mix of both modern and traditional décor, with a neutral palette layered with an inspiring combination of textures and contours. The free-standing claw foot bath features open pipework, which blends seamlessly with the gilded mirror and ornate tapware. The beautiful chequered inlay of the vanity features the rich dark colours of this bygone era, and a contrasting marble top gives it a unique visual twist. Add to this art-deco-style wall panelling, an intimate sloping ceiling, bold tiling and modern shutters, and this is a bathroom that exudes luxury. 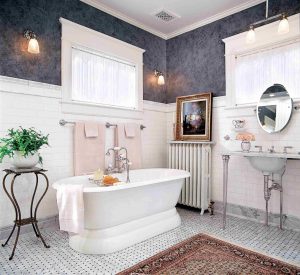 With an undeniable nod to the lady that inspired this design era, this bathroom features accents of feminine beauty in its tiling and accessories. Tapware is both eye-catching and functional with its old-fashioned turn mechanisms, and the free-standing bath is slipper-free and invitingly deep. The free-standing vanity features open pipework and is nestled beside a radiator that bypasses more conventional designs. Antique artwork, Art-Nouveau-style Victorian bathroom tiles, and a pop of living colour all add to the allure of this whimsical design. Finally, the exotic patterns of the feature rug draw inspiration from all corners of the former British Empire, adding interest and appeal.

Need to purchase some Victorian fixtures for your bathroom? Our suppliers Turner Hastings and Luxe By Design have some excellent products.