If you’re thinking of renovating your bathroom, and are deciding whether to include a shower hob, we’ve included a selection of stylish designs that will provide you with a little inspiration.

The primary reason for a shower hob is to prevent large amounts of water from reaching your bathroom tiling. If the tiling’s grout is old or damaged, the water is in danger of seeping through. However, many modern interior designers choose hobless showers because they can look much “cleaner” and more stylish. This is fine provided the shower is properly waterproofed.

Shower hob options for your bathroom

Just because shower hobs are a little less vogue, doesn’t mean you can’t look stylish. Here are some beautiful examples of shower hobs done right, so you can take some inspiration for your own bathroom. 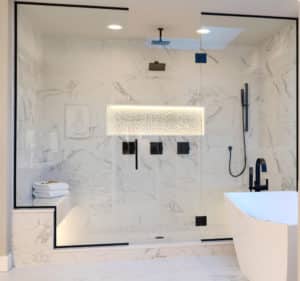 Shower hobs can look great when joined directly to shelves in the shower itself, as shown in this example above. The stone effect tiling runs throughout the entire bathroom to beautiful effect, with the shower hob looking nice and subtle, and capped with a white benchtop material that matches the shelf. This is a super stylish modern bathroom that would impress most. 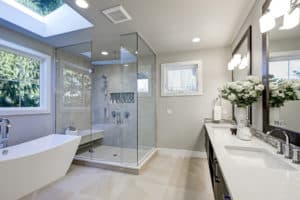 This simple shower hob is raised ever so slightly above the bathroom’s floor, and its white top blends into the skirting board on the connecting wall to create an understated, sleek look. This is the kind of inconspicuous shower hob that many people might prefer for their bathroom. It also works beautifully with the minimalist glass shower screen. 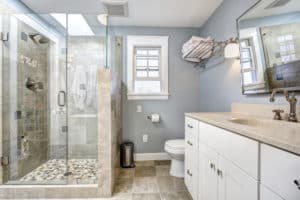 This sturdy shower hob is the bulkiest in our selection, and forms part of a tall dividing section that makes the toilet more private. The designer has chosen a clever mixture of textures and colours for their tiling, which includes greys and yellow/browns, paving stone patterns, and traditional stone textures to create a natural-looking bathroom. The hob underneath the shower door itself is also nice and wide to match the vertical section that joins it. 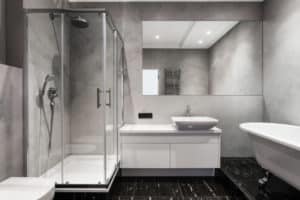 This ultra-modern black and grey bathroom is a picture of minimalism, and the shower hob blends into the design perfectly. It’s a fairly small hob and is topped by the single porcelain (or plastic) base of the shower, with the lower trim of the shower door also being black to create an almost stripe effect.

The raised shower hob also matches the raised height of the freestanding bath on the other side of the room, creating an appealing sense of symmetry. 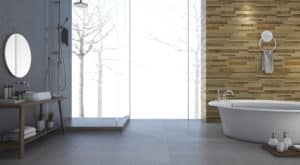 If you’re wanting an extremely subtle shower hob, this design might be the one for you. After all, the hob just acts as a barrier to keep water inside your shower space, so it can be nice and thin, and raised just enough to do its job effectively. In this design, the hob uses the same tiling as the surrounding floor, and is the same colour as its adjacent wall, so blends into the room very well. The shower also appears to be open on one side, which makes the hob itself much more important to protect the bathroom. 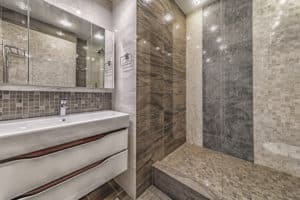 This lavish shower has a thick hob that blends into its adjacent wall. As with the other example above, a variety of stone textures are used in this bathroom which creates an organic, earthy effect. The glass panels for the shower are also super-minimal, and it appears to be half open which makes the hob essential for keeping water inside the shower.