From the moment of our birth we absorb the world voraciously—thousands of textures, patterns, and colours, painted onto our memories year after year, and creating our own sense of style. Few can explain why they’re drawn to a particular style, we just know we love it, and when it comes to designing our bathroom, the country style is one that many of us adore.

Here are five awesome country style bathroom designs, to get a little inspiration for your home.

The country style is distinguished through the use of rustic timber and aged brass, rather than the more common use of marble and stone. In our example above, a number of different woods (or wood substitutes) are used throughout the bathroom—a tortilla oakish floor that looks like it could be laminate, but works exceptionally well; a chocolate classic wooden cabinet, and peanut coloured mirror frames that complete the trio. Throw in the white panelled walls and the worn brass taps, and you have the classic country style that is warm, inviting, and undeniably beautiful. This country chic bathroom could be installed in a Brisbane home, but feel like you’re surrounded by English countryside, just down the road from Downton Abbey. 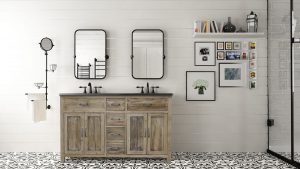 Country bathrooms don’t always need to be defined by wood—this example above has gorgeous floral tiling as its signature feature, immediately drawing the eye. Because the flooring is so flamboyant, few other patterns are used through the bathroom. There’s a tortilla-coloured wooden cabinet with a grey bench, and rather than the typical brass taps found in a country style bathroom, the designer has opted for simple black metal, which is reflected in the bathroom’s mirror frames, picture frames, and shower base.

This contemporary country style bathroom design would look delightful in any home, country or otherwise. 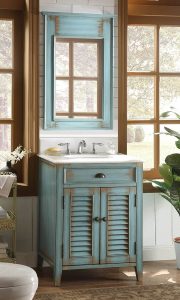 The sink, cabinet, and mirror are often the focal point of a bathroom, and in this example above, the designer has opted for something a little more daring. The faded turquoise sink—a few corners sanded down to reveal the original colour of the wood underneath—works beautifully with the oak window frames and flooring, and the simple rough bathroom mat. There’s also an old-fashioned gold-coloured mobile cart stacked with towels, which is a nice final touch to the bathroom. 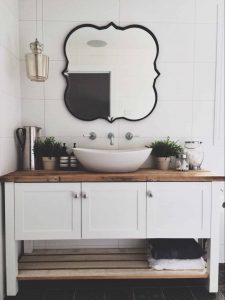 This bathroom is another example of white and brown complementing each other, creating a warm country style that is both functional and graceful. The oddly-shaped mirror is the centrepiece of this bathroom, its dark frame matching the patterned tiling, and making the white cabinet and walls all the more bright. The two plants are the most colorful items in the room, and also draw the eye as a result. 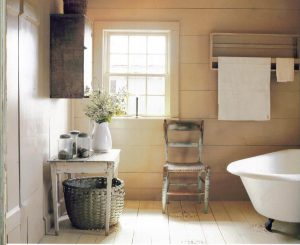 If you’re after a real rustic look to your bathroom, look no further than the example above. Traditionally, country style bathrooms were designed to withstand country living, often filled with dirt and mud that needs tfo be washed away after a hard day’s work on the farm. This bathroom reflects that need perfectly—an overload of timeworn wood that makes up the flooring, walls, and furniture, battered over the years, but retaining a simple touch of class. The bath looks like the most modern item in the entire room, sparkling white and ready to do its job.

Some may turn their nose up at this shabby style, but it’s the epitome of a traditional country style bathroom, which every other bathroom that tries to achieve this style must pay homage to.